Asia Cup has returned after a period of three years and the Indian Cricket Team needs to defend the title once again. The last edition of the cup was held in 2018 in ODI format.

Thereafter, the Asian countries were all set to clash on cricketing grounds in 2020. This was to be done in the T20 format. But, soon the pandemic broke and the event was postponed.

The delays were so much that it took two years to play again. Given that the pandemic has softened and the world is moving beyond Covid, the game can now be played.

This being the fifteenth edition of the Asia Cup tournament, India winning 7 out of the 14 times has proved to be the most successful team. Other than India, Sri Lanka has also lodged a win five times. Pakistan has done it twice.

The Asia Cup tournament was initiated in the year 1984. The last edition of Asia Cup was held in the United Arab Emirates in an ODI format.

India last time did not even lose a single match and emerged as the most successful in the tournament. Shikhar Dhawan, an Indian Batsman was named the Man of the Series for the tournament.

After a lot of postponements, the tournament this year was slated to be held on the soil of Sri Lanka. However, due to political instability, the venue has been shifted to the United Arab Emirates.

The major five cricketing teams in the continent have made it through the qualifiers. It is interesting to see the clash of the teams for the title.

The Indian campaign this year will be headed by VVS Laxman. He would be an interim coach in absence of Rahul Dravid who has tested positive for coronavirus. Fans are curious to know how India will manage to defend the title.

Asia Cup 2022 dates have been announced. Six Asian cricketing giants are playing to stake their claim on the trophy. Originally, the event was supposed to be hosted by Sri Lanka.

However, owing to the political unrest in the country, United Arab Emirates is hosting it this year. Asian Cricket Council (ACC) is conducting this mega event.

United Arab Emirates, however, has not managed to make it through. It lost in a qualifying match against a relatively super-dominant Hong Kong. With bowler Ehsan Khan in his form, Hong Kong is looking in much better shape.

Squads of all the teams have been announced. Given their recent performances, India, Bangladesh and Pakistan seem to be the top contenders while Afghanistan and Sri Lanka look weaker on paper.

The official schedule for the Asia Cup 2022 has been released. It is confirmed that this tournament will be played before the T20 world cup which is conducted by the ICC or the International Cricket Council.

The tournament matches have commenced from the mid of August 2022 and will go on till September 2022. The cup is being hosted in a manner that the boards will get enough time for conducting the T20 world cup 2022.

The teams are all set to clinch the title as they had been waiting for this since 2018.

Below is the day-by-day schedule of the matches and the venue where these matches will be played. 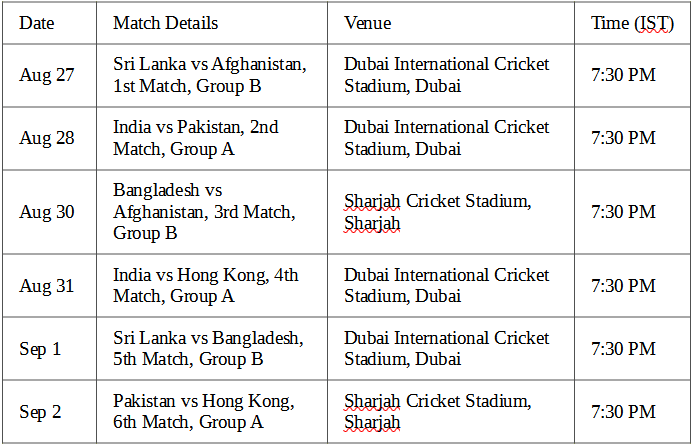 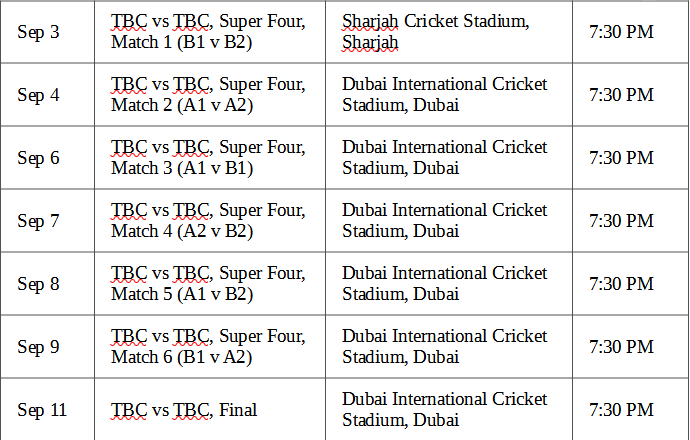 The Asia Cup 2022 consists of two groups A and B. Group A consists of teams such as India, Pakistan and Hong Kong. Group B comprises of companies such as Afghanistan, Sri Lanka and Bangladesh.

In 2018, it was decided that Pakistan would host the Asia Cup in 2020. However, due to political strife between India and Pakistan, India threatened to withdraw from participation.

With ACC’s decision to stick to Pakistan hosting the Asia Cup, India did not show much appreciation for the council’s decision.

The attacks on the Sri Lankan Cricket team in 2009 in Pakistan led to the change in the Council’s decision to consider it as a probable venue. Subsequently, Pakistan itself proposed a change of venue agreeing for a neutral location.

It was decided that Sri Lanka would host the Asia World Cup. It was then that the pandemic hit the world and it caused postponements in almost all events. Asia World Cup was no exception.

The Asian Cricket Council stuck with the hosts and they kept on postponing the dates. In 2022, when the Covid situation improved, the Council decided to go ahead with the tournament.

Considering the decision, Sri Lanka was chosen as the host. However, later due to political instability in Colombo, United Arab Emirates was fixed as the venue.

The United Arab Emirates is all geared up for the mega event. The people are flocking to the stadiums and the cities are jam-packed. The excitement is in the air and the event is turning out to be a success.

Flight Aura is your guide and friend in this Asia World Cup. We will help you book the cheapest tickets to UAE and get discounted accommodation. Also, avail top-of-the-class rates and experience on travel within the country.

For more information, send us a mail at [info@flightaura.com].